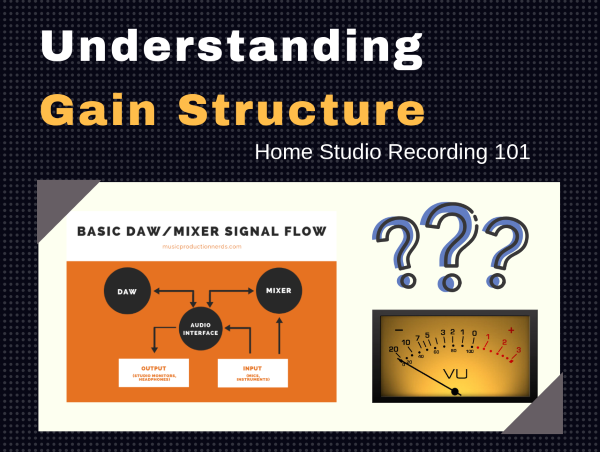 As you get going as a music producer, and start doing some home recording with your audio equipment, you’ll undoubtedly find the term “gain structure” or “gain staging” popping up a lot…

And to you, understanding gain structure or gain staging may seem elusive, even mysterious… some even overlook it, while others battle with it tooth and nail.

So in this article we will cover this topic in some detail, starting with the beginning of what gain staging really is, and how you may apply it in your home recording.

What is Gain Structure?

Gain structuring (or gain staging) is the process of setting the gain for each stage of amplification in an audio signal chain.

The main purpose of this is to get an optimal overall signal level without clipping or introducing noise or distortion.

In a sense, gain structuring involves getting the best possible signal-to-noise ratio from all your pieces of equipment.

It’s safe to say, then, that you want your signal-to-noise ratio to be as high as possible.

At its most basic, proper gain staging can be achieved simply by setting the levels of each stage so that no clipping occurs.

However, achieving this isn’t always an easy task. In order to set the levels optimally, you will have to be familiar with the capabilities and limitations of each piece of equipment in the chain, as well as the principles of proper gain staging.

One of the most important things to be aware of with regard to gain structuring is that sound encompasses quite a broad dynamic range.

Sounds range from whisper quiet to painfully loud, and even a single sound source can have a wide range of dynamic variance (this of how loud or how soft and grand piano can be played).

Like all audio engineers, you are probably well aware of how some singers can be difficult to hear on certain passages, yet only to clip the channel with a loud passage. This poses one of the most significant challenges in gain staging, as the signal chain will have to accommodate both extremes.

Further adding to the challenge is the fact that most types of audio equipment add a certain amount of noise to the signal. In isolation, the noise produced by a single piece of equipment may be negligible. But add other noise-producing pieces to the chain along with several stages of amplification, and you can see how proper gain structuring becomes a difficult task.

The most obvious course of action is to set the levels as loud as possible at each stage, without resulting in clipping or distortion…

But you should be aware that the combined amplification stages can cause clipping at the end of the chain, even if it doesn’t occur early on.

Proper gain staging therefore involves getting optimal volume levels at every stage, while ensuring that the combined volume doesn’t cause clipping at the master output. 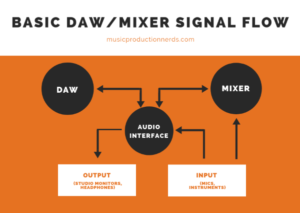 As you may know, the primary goal of mixing is to combine different elements together in order to come up with a cohesive and audibly pleasing whole. So this often involves setting levels so that one or two elements dominate the mix, with the others providing supporting roles. You can read more about proper mixing practices here.

As many budding mix and live engineers quickly realize however, getting this perfect balance isn’t always as easy as it would seem. When setting levels so that one or two elements stand out, one or both of them may cause clipping during especially loud passages. Furthermore, adding in the other elements may cause clipping at the master stage.

Obviously, the simple solution would be to set each individual level so that none of them clip their own channels. But even this could result in clipping at the master buss if their combined volume levels exceed the available headroom.

In order to achieve optimal gain structuring, you should therefore ensure that clipping does not occur in the individual channels, and that the overall mix level does not clip the master stage either.

What is the Most Critical Point in Setting Gain Structure in an Audio Signal Path?

The truth is, every single stage of the signal chain is crucial in terms of preventing clipping. There is no way around it: you simply have to ensure that clipping does not occur at any point in the chain, and each amplification level is optimized for high signal-to-noise ratio.

That being said, it is best to think of it as a hierarchy, as it is especially important to ensure that no clipping occurs at the start of the chain.

When a later-stage amplifier is clipping, you can simply turn down the input and fix the problem. If the clipping occurs at the source however, there is little or nothing you can do to fix it down the line.

Setting Gain with a Hardware Mixer This often results in poor signal-to-noise ratios, and increases the chances of clipping.

A more effective method is to set all the faders of the mixer to unity gain.

You can then adjust the levels of the preamps until you achieve optimal operating levels.

In addition to helping reduce clipping from wayward signals, this also gives you an easy visual representation of the ideal fader positions.

Most mixers come with LED indicators that let you know when a signal is clipping. These are usually labeled “peak”, “clip”, or “OL”, which stands for “overload”.

Ideally, you will want to set your preamps so that the loudest signal from the source just barely causes the LED to flash.

You should then turn the gain down by -15dB or so. This will give you a good middle ground between being able to get a good, strong signal level and having a measure of protection against unexpected peaks.

With all your faders at unity and your preamps set to optimal levels, you won’t have to keep adjusting levels upward in a process known as “fader creep.”

Even experienced audio engineers can be prone to this phenomenon, which usually results from a desire to make certain elements louder. In the worst case scenario, everything eventually is turned up to max, resulting in clipping at the output stage.

A much better solution is to simply leave the main elements of a mix where they are. You can then reduce the levels of the other channels to make the “main players” stand out.

Even if you find it necessary to increase the level of the main instruments (sparingly!), you will simply be making them louder without adding any more noise.

Setting Gain with a DAW Achieving proper gain staging in a DAW might seem similar to doing it on a hardware mixer, but there are some important differences.

With a professional analog mixer, there is always some headroom built-in that provides some degree of protection against wayward peaks and loud passages.

In some mixers, there may be as much as 20dB of headroom, so you can usually peak well above the 0VU mark without having to worry about clipping. In fact, some mixers sound even better when the channels are pushed into the red, making clipping and peaking with an analog mixer is sometimes even favorable, as this will produce that gritty analog distortion that can really juice up a track.

One notable scenario in which this effect was utilized is the Beatles’ recording of “Ob-La-Di, Ob-La-Da”. During the recording, Paul McCartney insisted that the acoustic guitars be recorded at hotter-than-usual levels. The engineer at the time may have likely balked at the suggestion, but the results speak for themselves!

Sir Paul probably wouldn’t get similar results with a DAW, with which even the smallest peaks can cause unpleasant sonic artifacts.

In a typical DAW environment, with myriad plug-ins at your disposal, it is often easy to push a signal to a point where clipping occurs. Furthermore, clipping can occur anywhere in the signal chain, and the results are never as desirable as they might be in an analog mixing chain.

That means if you’re mixing solely with a DAW (otherwise known as “mixing in the box”) yet want that analog warmth that comes from running your levels hot on a console, you’d either need to use something like a tape saturation software plugin, or a hardware summing mixer to achieve that.

Now as with hardware mixing, gain staging in a DAW essentially requires setting the level faders at unity and setting the input gain for optimal signal-to-noise ratios.

But there is one other factor to consider: digital signal chains aren’t nearly as susceptible to noise as analog circuits.

Considering that your signal source is relatively low noise, you don’t have to actually get the peak level as close as possible to 0dB.

In fact, many audio engineers recommend setting the levels so that the peaks barely reach -6dB or even lower. This gives you a lot more headroom when all the channels are summed to the master buss.

Cubase Pro 8 comes with a built-in tone generator tool that helps you set up proper gain stages. Many other DAWs come with similar tools as well, and you might find some use for them, even if you ultimately (and ideally) rely on your ears for gain staging.

Gain structuring with an audio interface is pretty straightforward. In most cases, all you have to do is set your levels so that the peaks just barely register on the clipping LED. You can then turn the input level down to give you some wiggle room in case of unexpected peaks.

Of course, you do have to make sure that the sound source is as loud as possible before it gets to the input of your audio interface. Very few consumer-grade interfaces are capable of truly pro-level signal-to-noise ratios, no matter what their marketing copy tells you. So boosting the input gain excessively is an almost surefire way to add noise to the signal, and it can only get worse the more channels you have to mix down.

Take a look at some of the audio interfaces we recommend.

Understanding gain structure isn’t exactly rocket science, and it is by no means a collection of “black art” secrets well beyond the comprehension of mere mortals. Most anyone can learn how to gain stage properly, given time and experience.

That being said, it is vital to learn the fundamentals of level balancing, signal-to-noise ratios, and how summing individual channels ultimately affects the final sound.

Get a handle on the fundamentals principles, know your gear, and practice constantly, and the secrets of gain structuring will be unlocked to you as well.