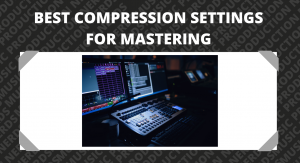 Whenever you have crafted a modern club music piece, punchy and aggressive rock tune with dark and smooth riffs, or a grandiose orchestral track, still, for it to sound professional and subtle, you need mastering. Using compression settings for mastering can significantly reduce the dynamic range to make your mix clearer, dense, and emphasize the details. Also, it influences the groove or sense of motion to change the mood, to add some excitement and a bite, or on the contrary, to make it relaxed and floating.

Basically, mastering is a process of polishing the final mix with an intent to make it sound more commercial or to be better translated on various audio devices. This process used to be done by specifically trained engineers who used to work in treated rooms with very few reflections. Also, mastering tracks used to be done using equipment specially designed with this process in mind. Mostly, that meant using speakers with very clear and flat frequency response and a lot of metering units.

As you can tell, the initial idea of mastering was to get the most straightforward and objective picture in order to make only those changes to mix that is necessary. Those changes might have included very slight EQ adjustments, limiting, and, of course, compression.

In this day and age, you do not have to be specially trained or buy any additional equipment in order to achieve great results in the mastering stages. In fact, most of the music production that you hear today was not made in special mastering rooms. It was mostly made at home or professional studios and most of the time within the same mixing project. Nowadays, mastering is not something that needs special training, but nevertheless, it is what is required of us as music producers.

As a music producer, you obviously want your music projects to be enjoyable and aesthetically pleasing. Whether you want people to relax in their car on the way home from work or to dance themselves away in the club, you want to give your project a final touch with some slight EQ tweaks and compression here and there. The best part about it is that you do not have to use any dedicated software. Great mastering could be done easily with your favorite compressor that you usually put on your kick or vocal tracks.

Using a compressor while mastering is actually a pretty straightforward process. But the most important thing to remember is that no mastering could save an unbalanced and lifeless mix. Mastering is intended to be a final step and gentle at that. So, before starting to master, make sure that you are satisfied with your mix. If you are, then you are ready to master.

Before we start compressing

Before you apply your compressor, listen to your mix carefully. It might need some gentle touches of EQ here and there or a low pass filter. Maybe you are not quite happy with the stereo width of your mix. Perhaps the low end of your mix is all over the place, and you might consider some mid-side processing. All of those changes are best to be executed before you actually apply a compressor since your frequency curve can affect your compression drastically.

On the contrary, if you are satisfied enough with your mix, do not overdo the master. Since this process was never intended to fix major problems – moderation is the answer. Try to do as little as possible while mastering. And the same goes for the actual compressor settings that you would use. If you are familiar with how a compressor works, we are going to use the same controls that we would normally use on single tracks, but with slightly different settings and approaches.

Since you do not want your track to sound smashed to bits, it might be better to use as low ratios as possible. Generally, you wish to use ratios of 2:1 on your master bus, this probably would apply to most genres and styles of music. That being said, if you are working on a dance music project, you might want to use the ratio of 3:1, which might give your track an extra edge and bite. Using a ratio of 4:1 and higher could be a dramatic overkill since the trick is to compress your track without any compression being noticeable.

The threshold setting that you would use on your master bus would actually depend on the overall dynamic range of your project. Generally, you would want to use low thresholds, so your track would be compressed all the time unless you are using it only to tame some rogue transients, then you would set your thresholds pretty high. But still, it is quite a good idea to set your threshold pretty low while you are working so you could hear what your compressing is doing better.

Now there is when things can get tricky, the attack settings that you would use on the master bus compressor would very much depend on your initial goal. If you want to polish some harsh transients or to level some dynamic inconsistencies, you would want to use a relatively fast attack, but do not make it too fast because that might sound quite unnatural and coarse.

For most of the projects, slower attack times would cover most of the requirements of the master bus compression. It is best to deal with dynamic inconsistencies in the mixing stages surgically compressing separate tracks. Master bus compressors are usually used to add some volume and weight to the project, so naturally, you would want your compression not to be blatant and hard.

The release settings you would use depend on the attack speed. If you use a fast attack, a faster release would be preferable. Slow attack times would require somewhat slower release, but generally speaking, you would want to set your release according to the overall dynamic flow of your track. It could be quite tough, but you would want to set your release so it would fall exactly between the attack and the next transient. That would bring the details of the mix in the most efficient and musically pleasing way.

Since we are using very moderate and gentle ratios and setting our attack and release times musically, the knee settings would not really make much difference. Nevertheless, it does not hurt to set a somewhat softer knee in order to make the compressor even more subtle. But remember that using a lower threshold makes your compressor work all the time, and there would not be any uncompressed signals to actually apply a knee setting. That will make more sense if you are using a higher threshold.

Which compressor to use

As it was said before, you can easily use your favorite go-to compressor on the master bus and achieve great results. But since nowadays we are mostly working with digital and virtual gear, most projects could feel too pristine and sometimes lifeless. We will not get into an ancient argument about what is better – digital or analog. But some subtle and gentle analog coloration did not hurt anybody yet. So, you might consider using some analog emulation compressor instead of your digital one.

Since those compressors are as capable as the digital ones, you could still apply the same settings. Where you could really benefit from using analog compressors is that they could give your track some character that they might have been lacking before. You might even think about using some recreations of legendary vintage consoles in order to make your tracks sound like they were mastered in a certain celebrated recording studio. You might disagree, but it is less important how things sound than how they feel.

Giving the summary of all written above, when you are done with composing your tune, it is crucial to apply some mastering settings before sending it off to the real world. Compressing your audio material is a good idea, and there are a few things that you need to keep in mind. The essential compression settings for mastering include using as low ratios as possible, ideally 2:1, as well as low threshold combined with slower attack times. Choosing the proper release settings mostly depends on your initial idea, and applying a knee setting could a bit change the sound of your material. You should always keep in mind the purpose and the idea of your track and then pick the settings which suit the best.