You can achieve that distinctive character and sound in your mixes by going for one of the best 500 series EQ, and at an affordable cost too! Without further ado, let’s help you figure out which one suits you most.

Music Production Nerds is supported by shoppers like you! If you buy something through our affiliate links we may earn a small commission at no added expense to you.

Rupert Neve Designs 551 is a great choice for someone who is looking for an affordable, well-built, and great-sounding EQ. It offers a 3-band inductor-based EQ that will make everything sound extremely good. 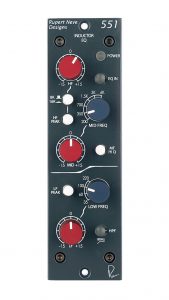 Rupert Neve Designs 551 is the most popular EQ among many others. Who wouldn’t want an EQ that was designed by Rupert Neve? It might come as a surprise to you, but it’s the most affordable, too!

Many users say that Rupert Neve Designs 551 is by far the best EQ that they have ever tried because it sounds no less than outstanding. Users also praise it for being versatile and making everything sound better. Also, it’s easy to use as it has a pretty straightforward and uncluttered front panel. Some users pointed out that somebody may not be happy if they’re looking to achieve a gritting sound. Other users suggested that it would be better if instead of a fixed high pass filter, this EQ had variable low-pass and high-pass filters.

What we value the most, among other things, is authenticity, and Rupert Neve Designs 551 is designed keeping in mind the style of the classic Portico series. It has a solid build, it fits perfectly in the chassis and looks really well with other modules in the rack. Other than design, we were pleasantly surprised by the remarkable silk like quality of the top end that impeccably captures the British sound that was defined by Rupert Neve.

Rupert Neve Designs 551 is a great choice for someone who is looking for an affordable, well-built, and great-sounding EQ. It offers a 3-band inductor-based EQ that will make everything sound extremely good. Note that it has a fixed frequency high pass filter of 80 Hz. elysia xfilter 500 is a union of aesthetics and function. This EQ is ready to give you a massive range of tone-shaping capabilities and it sits comfortably as a two-space module in your chassis.

Users like elysia xfilter 500 as it’s capable of making instant improvements to the sound and it’s quite versatile. Users add that this analog EQ gives clear and focused sound that users weren’t able to achieve when using digital EQ, specifically when they were boosting high frequencies. Additionally, users praise that this unit requires two spaces in the chassis because it makes it much easier to operate, especially if they put it at eye level. Some users noted that they wished it was possible to use this EQ in dual-mono and others pointed out that they experienced some difficulties with recalling previously used settings.

What we like about elysia xfilter 500 is that its EQ functions are of excellent quality and every time, we get the best results possible, no matter on which instrument or bus we put it on. When it’s applied on the mix bus, we can easily adjust anything back and forth, and you can do more when it’s applied on drums. Thanks to the shelving filters, we can add more air or lift the subs without making the mix extra muddy.

elysia xfilter 500 is a great choice for someone who is looking for an affordable, versatile, feature-packed stereo EQ that has a classic sleek design. It has 4 bands and gives a clear and focused sound. Note that you might experience difficulties with calling up previously used settings and it can’t be used in dual-mono.

API 550b is a logical advancement of the famous 1967 550 within 550A that features several new frequencies and one extra filter band. The legendary API 550 has played a major part in the history of music recording in the 60’s and 70’s and these days, many records still depend on this unique sound.

API 550b operates on the classy circuitry and proprietary components, so it can be said that it merges past with the present quite nicely. Also, this EQ gives you the only necessary number of controls and it has 4 EQ bands. Each of the bands gives you 7 switchable filter frequencies that span 4 to 5 octaves. API Proportional-Q makes the filter bandwidth wider on the minimal settings and makes it more narrow at the higher settings.

Users say that API 550b is amazing as it adds more punch and controlled aggressiveness to the sound and makes drums sound way better. Also, users add that they have found this EQ to be an absolute joy to use and they didn’t experience any fumbling when they were trying to find necessary frequencies. Some users wish that the front panel was a bit more straightforward as it’s hard to tell the difference between which knob does what.

What we like about API 550b is that it’s capable of affecting or reversing tonal modifications. We had found ourselves several times in situations when a tonal reconstruction was required and when API 550b was applied, we got to witness an amazingly predictable analog performance under duress.

API 550b is a great choice for someone who is looking for a well-built, well-known unit that offers a famous-sounding equalization while providing only necessary settings. This EQ is known to give a punchier with a tighter bottom sound and is a joy to use. Note that you might experience some issues while trying to understand the functions of the knobs on the front panel.

Solid State Logic 611EQ is a recreation of the legendary Solid State Logic SL 4000 E console channel strip that has been used for mixing lots of classic and well-known records. It offers easily switchable Brown and Black modes and 4-bands EQ.

Solid State Logic 611EQ offers a versatile 4-band channel EQ that gives a lot of flexibility in tone shaping. Low and high-frequency bands can be easily switched from shelf to bell, which gives a possibility for applying surgical precision or broad adjustments depending on the case. As midrange bands are completely parametric and have controls for frequency, gain, and Q, all of that allows applying diverse tone sculpting options. Pushing the IN button gives you a chance to access A/Bing tracks, while the BLK button allows you to switch between Black and Brown modes.

Users like Solid State Logic 611EQ because it gives any time impressive results and beautiful sound. Also, users add that they really like how transparent higher frequencies sound when they are boosted. Some users pointed out that they wished 611EQ would have a surrounding chassis because all the electronics is exposed, which makes it considerably harder to put into the rack. Other users said that they would be happier if the front panel wouldn’t be so crowded.

Solid State Logic 611EQ is a great choice for someone who is looking for a thorough recreation of the well-known unit that is versatile and has that distinctive grungy and punchy sound. This EQ offers a 4-band channel EQ with the possibility to choose between Black and Brown modes. Note that you may be a bit confused by the crowded front panel and the fact that there is no surrounding chassis present.

Heritage Audio 73EQ JR is a classic-looking EQ that offers you to try the flavor of the famous 1073. It uses the same Class-A transformer balanced output stage, transformer coupled line preamp, and 3-band EQ as classic 1073.

Heritage Audio 73EQ JR is truly one of a kind in its kind, as it is capable of capturing a Class A sound without having the need to rely on external preamps. Its 3-band Baxandall type EQ with High and Low shelf offers a choice of 4 high-shelf frequencies as opposed to the traditional fixed 12 kHz frequency band. The mid-range band uses a dual inductor that is responsible for certain thick high or low, mid boosts that are praised by many sound engineers and music producers.

Users agree that Heritage Audio 73EQ JR sounds really nice and silky smooth. This EQ makes the mids sound nice, not harsh, and much more organic. Some users add that they like the unique character of this EQ that isn’t possible to find in a variety of plugins. Others noted that they really liked how the bass sounded as polished, fat, and classy without being excessively vulgar. A few users pointed out that they would be happier if the knobs were a bit bigger.

Heritage Audio 73EQ JR is a faithful recreation of the famous 1073 and is a good one. There are many manufacturers that are known for producing analog units based on 1073, but those recreations that are the closest to the original are valued the most. 73EQ JR has a unique and very distinctive Spanish character that is noted by many audio engineers and music producers around the world.

Heritage Audio 73EQ JR is a great choice for someone who is looking for a really good recreation of 1073 that offers a nice and silky-smooth sound with a distinctive Spanish character. Note that you might encounter some issues regarding the size of the knobs.

A 500 series EQ is an analog equalizer that comes into a much smaller form factor than regular 19” rack units.

With 500 series EQ, you can get richer analog sound and save a lot of space by having a unit in a much compact form factor.

When choosing a 500 series EQ, you have to take into consideration the number of the bands and whether it works with mono or stereo signal.

Generally, if the EQ has 3 bands, then it’s enough to control the flavor. But if it has more than 3 bands, it will be enough to perform any surgical manipulations.

Here it depends on which signal you work on more. If you work more with a mono signal, then it’s no use for you to have an EQ with the stereo signal. But if you opt for stereo editing and the EQ that you like is in mono, then you ought to have two EQs.

How to choose the right one for you?

When you are picking from among the best 500 series EQ, you have to pay attention to whether the signal that you work with, meaning stereo or mono, corresponds with the signal that EQ is capable of working with. Also, based on what purpose you need the EQ, make sure you take in consideration the number of the bands.

The modular format for the audio equipment that was developed by API is named 500 series audio. 500 series modules can be compact versions of the larger 19″ gear and have the same characteristics but are more affordable, portable, and lightweight. They can fit into power racks or straight into a mixing console.

Is Eurorack the same as 500 Series?

No, it’s not. Eurorack is a modular synthesizer, while the 500 series include processing and audio editing tools such as equalizers, preamps, and compressors.

Saul Walker, who was a founder of API, invented the 500 series format in 1968. This format was the base of his console designs.

How many rack units is a 500 Series chassis?

It depends on the manufacturer of the rack or chassis, but generally, you can put something between 2 and 10 units there. The Best Record Player with Built-in Speakers and Bluetooth